Battery cell production capacity in Europe will increase to as much as 1.5 terawatt hours (TWh) in the next eight years, up from a projected 124 GWh in the current year. This is the finding of the Fraunhofer Institute for Systems and Innovation Research ISI in a recent forecast.

A few years ago, experts were still clamoring for the development of European battery cell production. Because until recently, virtually all lithium-ion batteries came from China, Japan or South Korea. Apart from the temporary supply bottlenecks of the Asians, there is another weighty argument for a European battery cell production: the know-how. It took the automotive industry a long time to understand that the battery cell will be in the future what the combustion engine was in the past: a core competence. 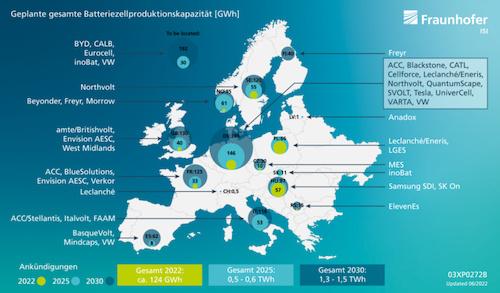 Today, the European manufacturers Northvolt, Volkswagen and Automotive Cells Company (ACC) in particular are pushing into the market and investing in the rapid development of production capacities. Together, they have announced around one-third of future European cell production capacity.

Mercedes-Benz and automotive group Stellantis, with Fiat Chrysler and France's PSA Group, have also joined France's ACC in announcing plans to build gigafactories in Germany, France and Italy. ACC and Sweden's Northvolt will benefit from support from the EU's Important Project of Common European Interest (IPCEI).

According to Fraunhofer ISI, this means that in 2030, around 1.5 TWh and thus around a quarter of global battery cell production capacity will be located in Europe. Germany will produce the most battery cells at 395 GWh. It is followed by the United Kingdom (130 GWh), France (125 GWh), Sweden (120 GWh), Italy (118 GWh), Hungary (87 GWh), Poland (66 GWh) and Spain (62 GWh). In total, battery cell production facilities are being established in at least 15 European countries.