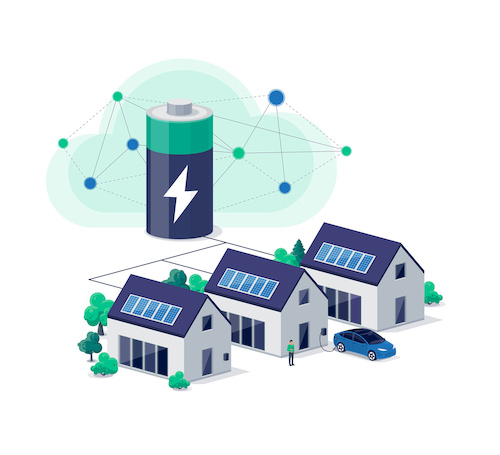 ©Shutterstock.com / petovarga
The SmartEN study shows how the flexibility of prosumers and consumers can boost the energy transition.

Less need to expand the grid, less need to curtail the output of renewable energies, lower costs – making greater use of demand-side flexibility (DSF) would bring many advantages. Nevertheless, this is still a low priority for policy-makers, partly because up until now figures to underpin the potential of this approach for the energy transition and climate protection have not been available. A new study published by smartEn, a European business association and partner of EM-Power Europe, is now providing such figures.

The new report provides insights into the potential of DSF across the 27 EU countries by 2030 and quantifies benefits in terms of costs and emissions savings. To this end, DNV, the consultancy firm commissioned with conducting the study, compared two scenarios – one assuming full use is made of DSF potential in buildings, electromobility and industry, and one without DSF.

Billions could be saved

According to the study, making use of DSV could lead to annual savings between €11.1 billion and €29.1 billion for grid expansion alone. This amounts to 27–80% of the investments that according to current predictions would be needed to meet increased electricity demand and to integrate renewable energy installations in low and medium-voltage grids between 2023 and 2030. In turn, lower annual grid costs and electricity prices could bring consumers savings of up to €71 billion every year. What’s more, DSF could help prevent the curtailment of renewable sources of energy on a scale of 15.5 TWh in 2030, i.e. 61% less curtailment than in a scenario without DSF. To put this into perspective, feed-in management curtailed around 3% of renewable energy in Germany in 2021, amounting to a total of 5.8 TWh of electricity. Leveraging renewable sources of energy more efficiently would also entail greenhouse gas reductions of 37.5 million metric tons, which would equate to 8% lower emissions than without DSF. In turn, this would enable the electricity sector to even exceed its “55% by 2030” target.

Supply security is another aspect that stands to benefit from DSF. According to the survey, at least 60 GW of generation capacity would be lacking in a scenario without DSF to be able to guarantee supply during demand peaks. Load shifting and restriction could balance these demand peaks and lead to annual savings of 2.7 billion euros that would otherwise be needed to install expensive peak load power plants.

According to the study, electrical heating in private households has the greatest potential to provide flexibility, followed by smart charging. Other potential sources that were covered by the study include combined heat an power (CHP), load control in industry (demand-side response) and behind-the-meter battery storage systems. The authors based their calculations on an electricity demand of 4,081 TWh by 2030. This is broken down into 2,858 TWh of conventional consumption from households, commerce and industry, 151 TWh for the electrification of passenger car traffic, 510 TWh for heat generation from electricity and 562 TWh for the production of hydrogen according to the REPowerEU plan that sets out a production of 10 million metric tons of hydrogen from renewable sources of energy by 2030. (SP)

If you want to learn more about demand-side flexibility and the work of smartEn, watch our interview with Michael Villa, Executive Director of SmartEN on Youtube channel!

The International Exhibition for Energy Management and Integrated Energy Solutions