RWE annouced that it has joined NortH2 , a consortium of companies intended for the development of a centre for green hydrogen for north-western Europe based in the Netherlands. RWE plans to contribute its expertise in renewables and hydrogen to the project. 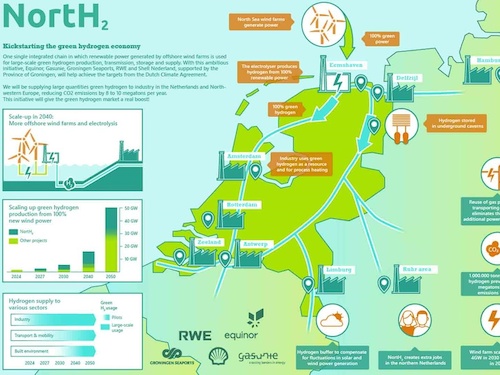 Together with its NortH2 partners, RWE is conducting a feasibility study that will last until 2021 –pending a positive outcome, initial development activities could begin in the second half of 2021. The NortH2 partners intend to jointly establish a system of electrolysers, offshore wind farms, gas storage and pipelines in order to convert offshore wind power into green hydrogen, store it and transport it to industrial clusters in north-western Europe. The aim is to create a generation capacity of 4 gigawatts (GW) by 2030. Recently, Equinor has also announced that they joined the project.

Roger Miesen, CEO of RWE Generation, said: “A project like NortH2, which produces green hydrogen to decarbonise industry, can contribute to achieving the Dutch and European climate targets for 2030 and to implementing the Paris agreement. We are committed to ensuring that a hydrogen market can develop rapidly in Europe.”

The ees International Magazine is specialized on the future-oriented market of electrical energy storage systems, not only from a technological-, but also a financial and application-oriented point-of-view. In cooperation with ees Global, the ees International Magazine informs the energy industry about current progress and the latest market innovations.